With so many amazing options, choosing where to go in Norway can be a challenge, so we hope our summary helps you find something that suits you.

What is a Norwegian Fjord Cruise?

A fjord cruise in Norway can take you all the way along the long Norwegian coast using the 'Kystruten' Norwegian Coastal ship such as Hurtigruten or Havila, or you could join a 'port-to-port' voyage.

Alternatively, you could do a land-based tour including several short cruises into the picturesque southern or western fjords. Choosing a shorter cruise into the fjords takes you closer to ‘real life’ and eliminates the need for tender transfers to shore. You don't need to sail on a large cruise ship to access all these fjords and little fjord towns with ease. Luggage can be taken care of, and you can slow down with several nights by the fjords in a charming hotel.

There are many modern cruise boats that shuttle day trippers or locals between the different fjord towns. These can be express boats running between larger well-known villages such as Bergen, Aurland, Geirganger and Flåm or more leisurely boats that stop at each dock, when requested by locals. We can arrange tickets for these local boats, take care of your luggage and book your transfers. These cruise boats such as 'Vision of Norway' in the Nærøyfjord often have lovely cafes onboard, large panoramic windows and comfortable seating with cutting edge environmental credentials.

The Southern and Western Fjords of Norway

The most spectacular and most frequently visited fjords in the southwest of Norway are the Sognefjord, the Hardangerfjord, Geirangerfjord, Nordfjord and the Lysefjord. Then we have a number of smaller fjord arms coming off the main fjords. The larger fjords such as Sognefjord tend to look more like huge lakes whilst the smaller fjord arms are the ones with the steeper clifts and more dramatic scenery. 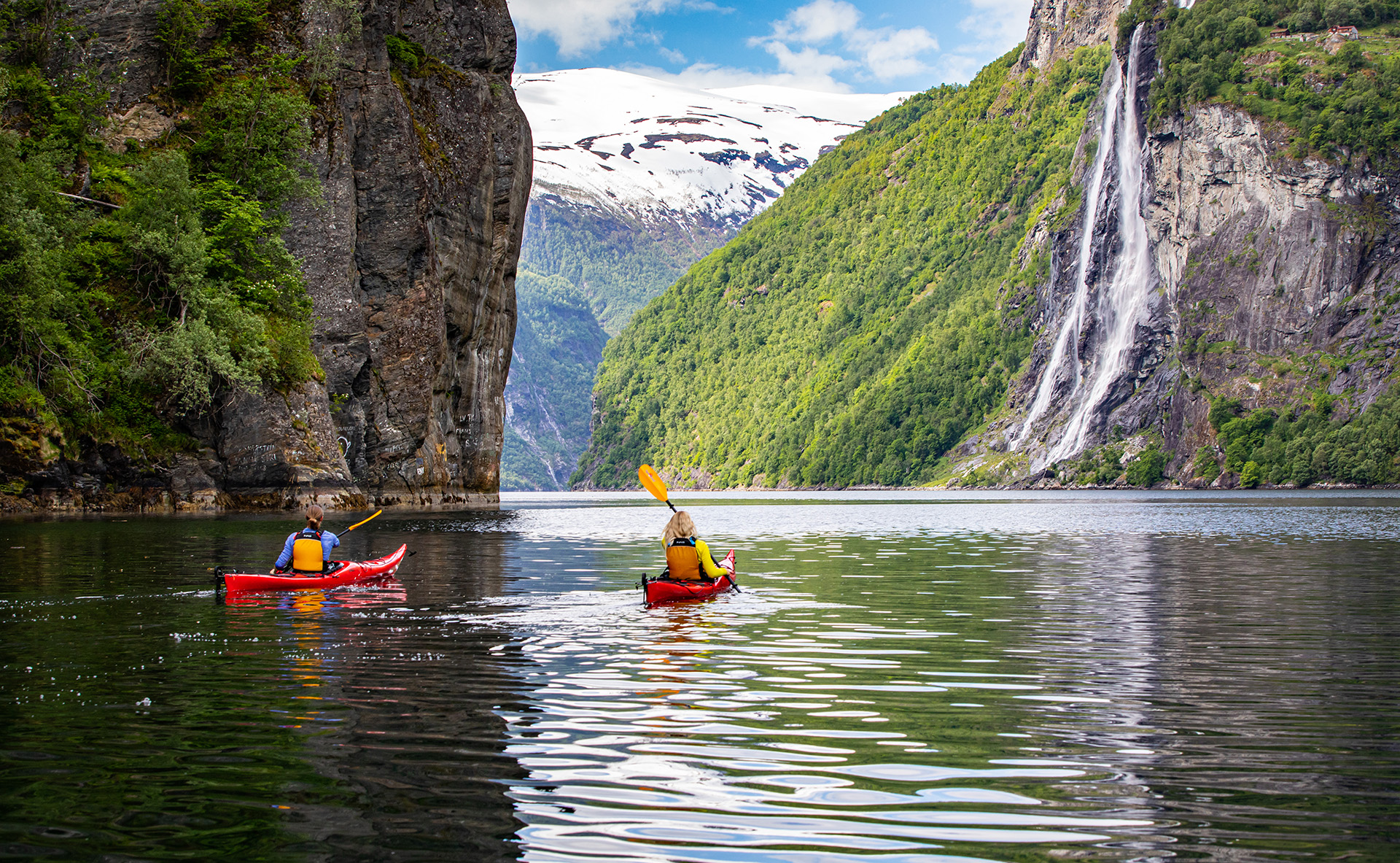 Sognefjord - the large fjord above Bergen

In the Sognefjord (Norway’s deepest) you will find the popular fjord-arms of the Nærøyfjord and the Aurlandsfjord, which are visited during the Norway in a Nutshell® excursion or on our private mini-coach tour, Beautiful Norway.

Off the Sognefjord we also find the Fjærlandsfjord stretching north from Balestrand, and which ends just underneath the majestic Jostedal Glacier, Norway’s largest.

Join our 1, 2 or 3-day Sognefjord in a Nutshell® tour and cruise to explore Balestrand and the Fjærlandsfjord.

The Hardangerfjord is Norway’s third largest fjord and is home to a vibrant farming and orchard community. It is more commonly visited on independent Hardangerfjord self-drive tours, as a visit to smaller villages and farms is a highlight. For the active traveller, hiking opportunities abound, and the strenuous day hike up to Trolltunga is spectacular.

The massive Folgefonna Glacier and Norway’s most spectacular waterfall, Vøringsfossen are also found in the Hardangerfjord. 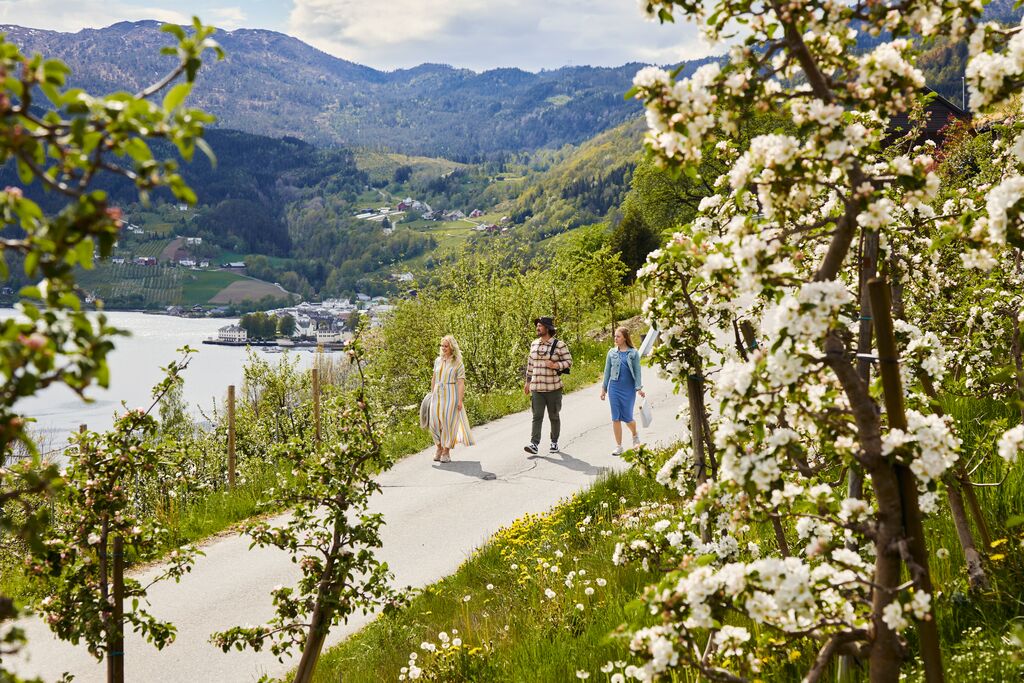 Lysefjord - a small fjord near Stavanger

The 42-kilometre-long Lysefjord is located in the county of Rogaland, near Haugesund and Stavanger, south in Western Norway. This fjord is not well known but the massive sea cliffs along it are!!

Pulpit Rock (Preikestolen) rises 600 metres up from the inner reaches of the Lysefjord. Joining a day tour from Stavanger, you can either walk to the top or marvel from the fjord below. We also have independent tours that stay near the Pulpit rock - you can cruise below and then relax in a charming hotel along the fjord.

Other significant attractions are the Kjærag Cliff further into the fjord, which is twice as high as Pulpit Rock. Lift your eyes to see Kjæragbolten, a boulder wedged into the crevice more than thousand metres high.

Our Pulpit Rock and the Southern Fjords tour visits this region, taking you off the tourist track to experience small Norwegian villages and spectacular sceneries. 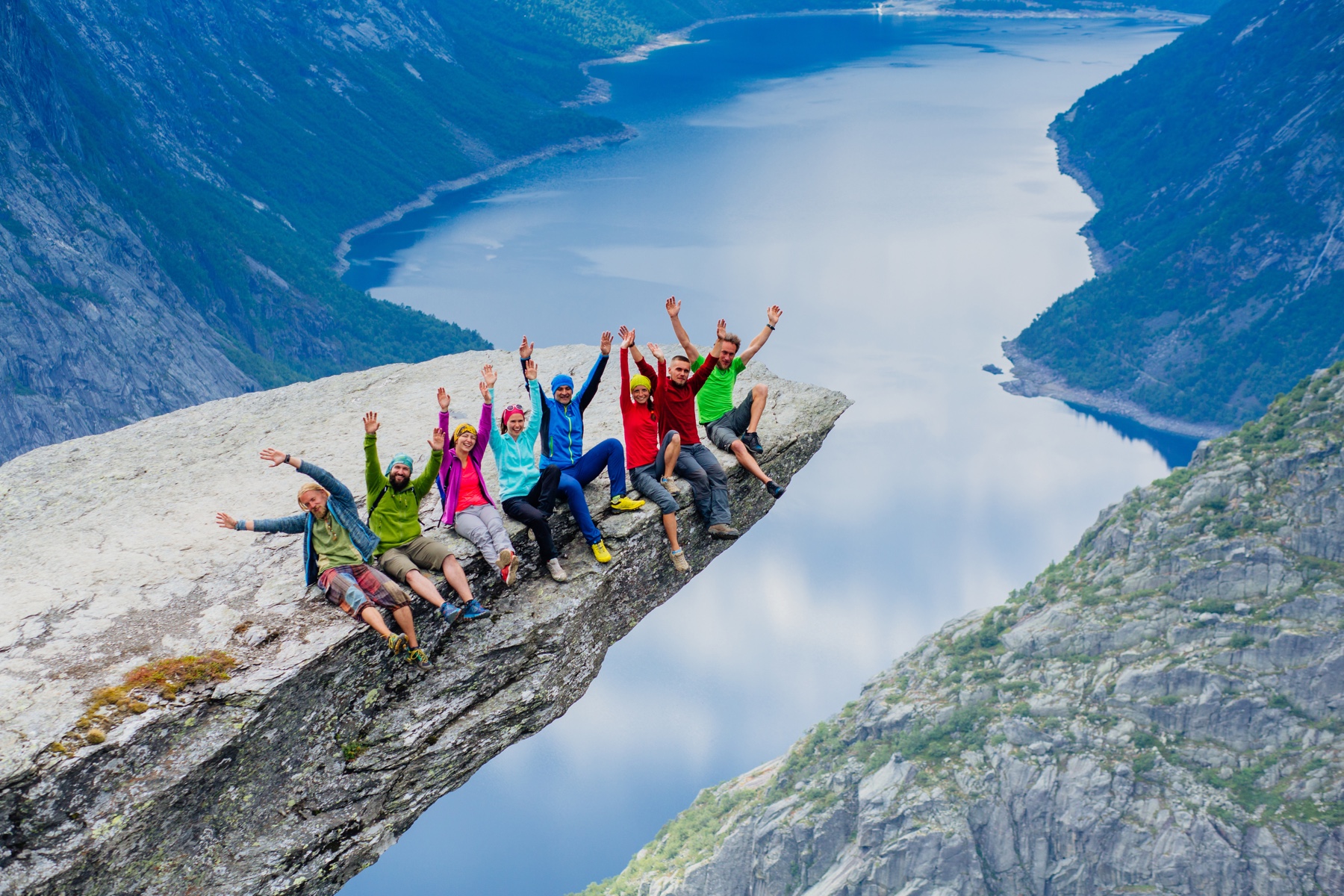 Geirangerfjord - a small fjord near Geiranger

The Geirangerfjord cuts nearly 16 kilometres inland through Norway, and as such provides magnificent fjord vistas. On a cruise into this fjord, you can sail very close to the famous Seven Sisters waterfall and the Suitor, located directly opposite each other on either side of the fjord. Those kayaking from Geiranger can cool down under their gentle spray. 50 Degrees North offers a new minivan tour which visits Geirgangerfjord - Beautiful Norway with a rib boat tour out of Geiranger and lunch.

The Geirangerfjord is most often visited during a summer voyage on board the Norwegian Coastal Voyage with Hurtigruten or Havila, or on our self-drive or mini-coach tours. This small fjord village, Geiranger, is host to thousands of tourists during the busy summer months, and is best avoided in peak season.

Nordfjord - a large fjord near Ålesund and Kalvåg

The glaciers, fjords, sea and mountains in the Nordfjord area have some of the finest scenery Norway has to offer. Even though some of it's villages are the most 'instagrammed' spots of Norway, it isn't a well known fjord and it has been hard to access unless driving.

Visiting Nordfjord is now possible on our new 'Western Fjords' tour which skirts along this fjord by minivan. The Western Fjords of Norway, starting from Bergen and finishing in Ålesund offer some of Norway's deepest, sea-drowned valleys covered by steep, rugged terrain scoured and gouged by glaciers. It is a landscape that is utterly unique and profoundly beautiful.

When is the best time to cruise the South and Western Norwegian fjords:

June through to August is the peak of the Norway cruise season, but small local express boats run all year round.

Cruises can either visit these fjords from Bergen, Àlesund or Stavanger. We provide transfers from train stations that stop between Oslo to Bergen as well as transfers from the ferry stops. You don't need to carry all your luggage with you on these tours - we can arrange portage between cities.

Fjords in the North

Moving right up North, the Trollfjord in Lofoten offers some of the most beautiful photographic opportunities from the deck of a Hurtigruten ship, or from a fast RIB boat. This dramatic fjord lies above the Arctic Circle, in the midst of the Lofoten Archipelago. You can reach the Trollfjord on a Hurtigruten voyage, or by RIB from the fishing village of Svolvær.

You can also explore the Atlantic Highway, starting from Ålesund and finishing in Trondheim. Our Scenic Norway tour, 'Our Scenic Norway tour', provides you with a driver who navigates two of the most famous Norwegian Scenic Routes. Be amazed by Norway’s most visited tourist road, Trollstigen Road with its eleven magnificent hairpin turns and the Atlantic Highway, famous for its twisting bridges over the coast.

At 50 Degrees North we are all Scandinavians promoting our home region from the heart. Contact us to get expert advice on choosing the Norwegian Fjord Cruise that is right for you.

With careful planning, you could visit them all, and even escape the crowds. Let us show you how to get close to Norway’s most beautiful fjord scenery with our tailor-made itineraries and Norwegian coastal voyages.