Jalman Meadows is a semi-permanent Eco Ger Camp, located about 3 hours' drive north east of Mongolia's capitol Ulaanbaatar. The green hills form the Southern tip of the Siberian taiga forests, and to me they seemed like a strange yet familiar combination of plants from Scandinavian forests and English gardens! 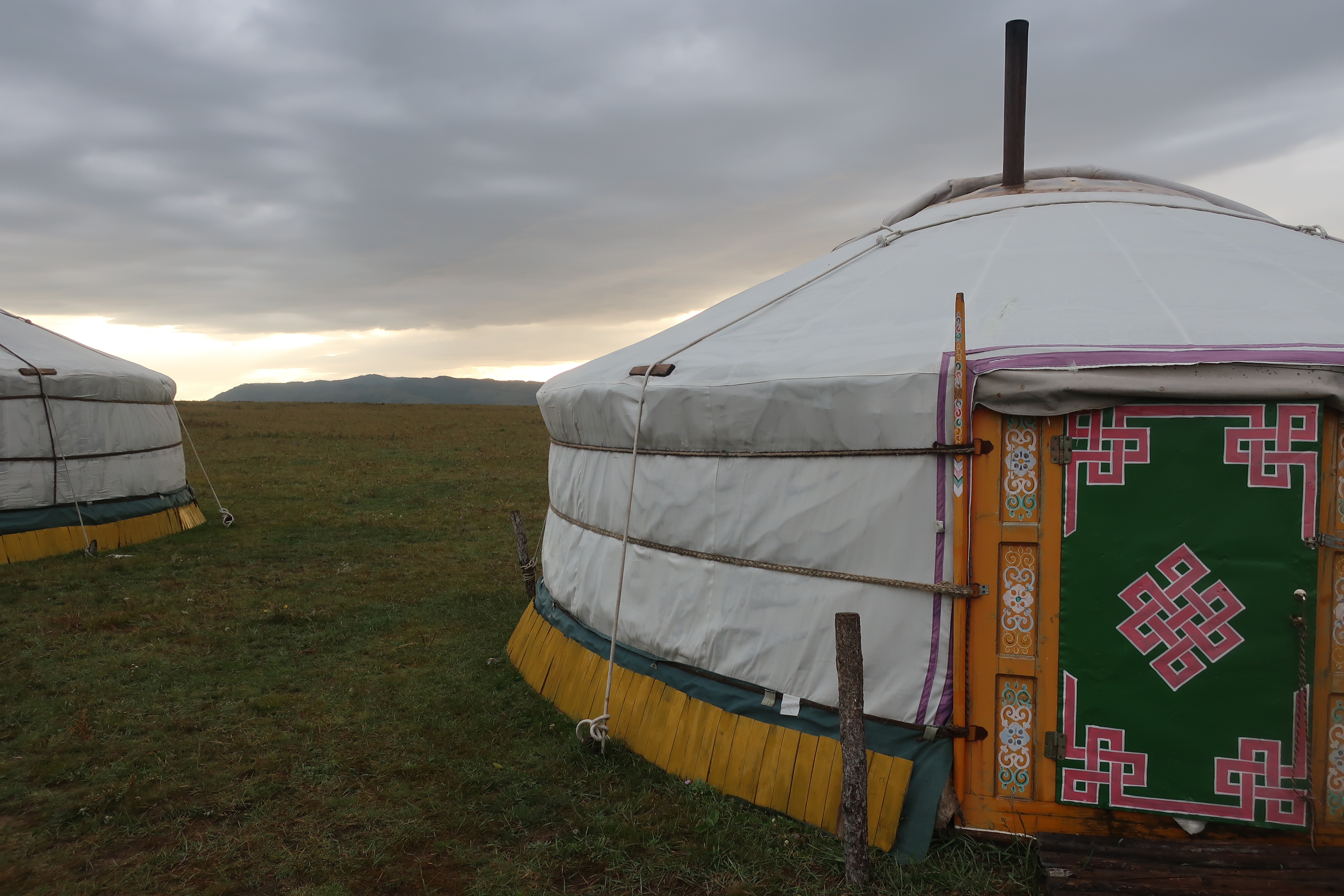 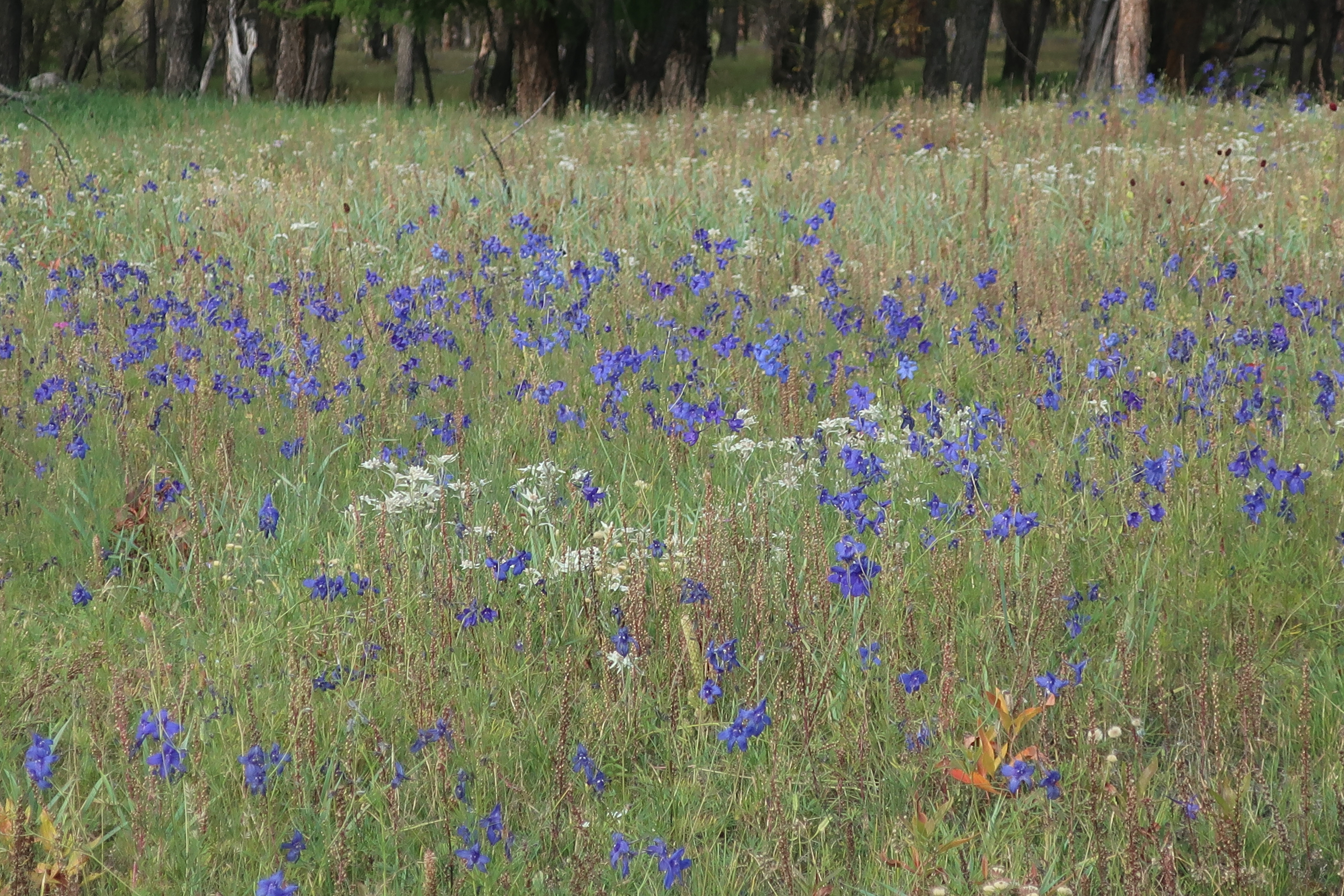 The ger camp is built each April and taken down at the end of September, you can find tours that include this camp here . They have a "leave no trace" policy, meaning that all rubbish is taken to the capitol Ulaanbaatar. The camp is in Khan Khentii Strictly Protected Area, and further North you would find the stomping grounds of a very young Genghis Khan. There are no roads, so the distances are measured as how the crow flies, and driving times are estimates only.

The transfers are… lots of fun! You will be taken either on a small bus or SUV 4-wheel drive monsters. The drivers are all very experienced, and they take split-second decisions on which track to follow. Remember, there are no roads in the wilderness, so the rides were fun and bumpy! When we arrived at the camp, we were greeted by staff and given wonderful blueberry juice made from wild blueberries collected from the green hills around the camp. 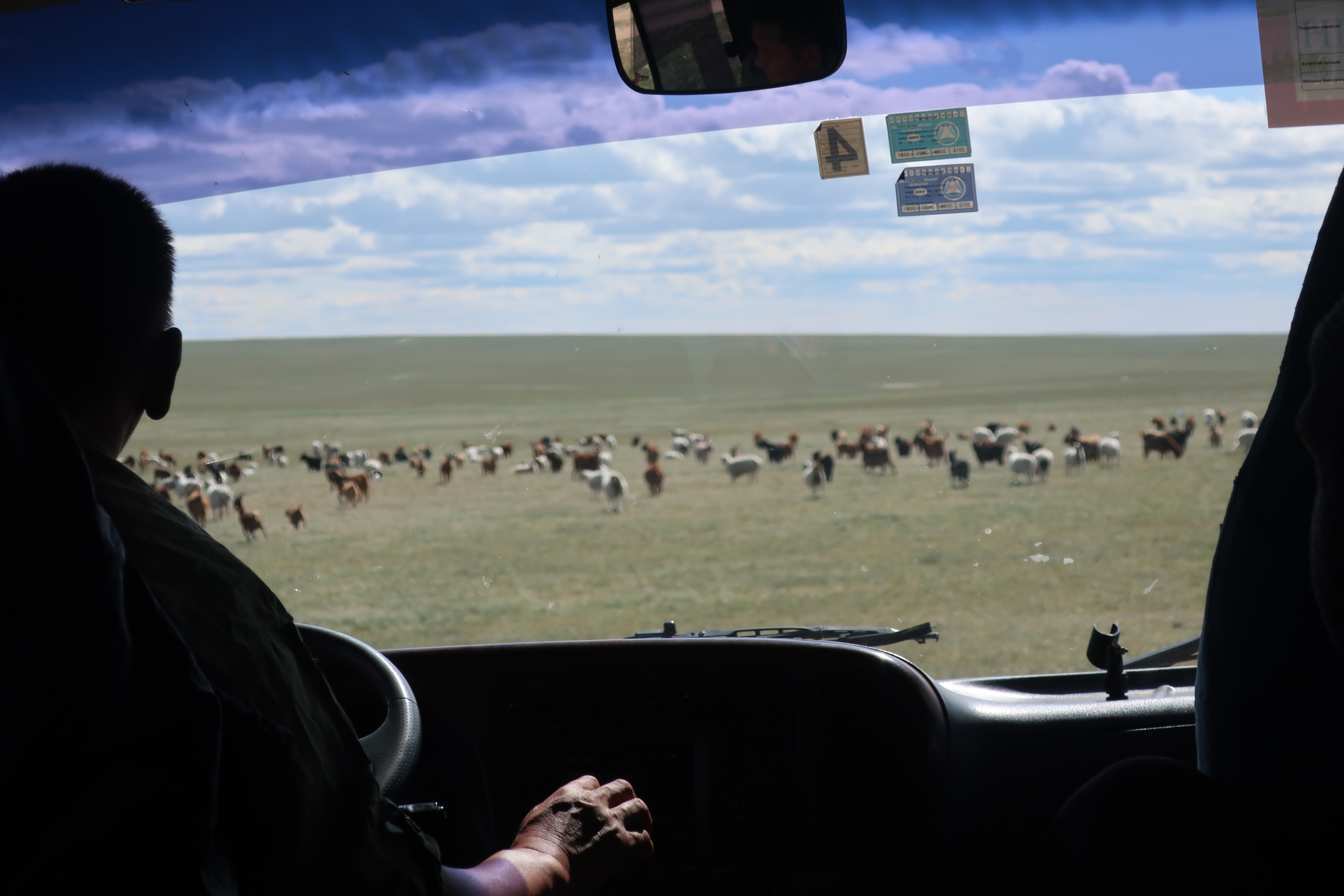 I shared my ger with my friend. The beds were along the walls, on opposite sides of the ger. There was a stove in the middle. There were two chairs and a table with a candle, a jug of drinking water and two glasses. Beautiful wall hangings and silks decorated the ger. By the low, decorated door, there were stools to place our luggage on, coat hooks, a rubbish bin, a mirror, a shelf with soap and towels, and a sink! The water container in the sink was refilled daily, and you could use the sink to wash your teeth and hands. The floor was wooden. I visited a larger guest ger, where two beds in the middle formed a double bed, plus two single beds were placed at either side - perfect for a family with 2 kids. 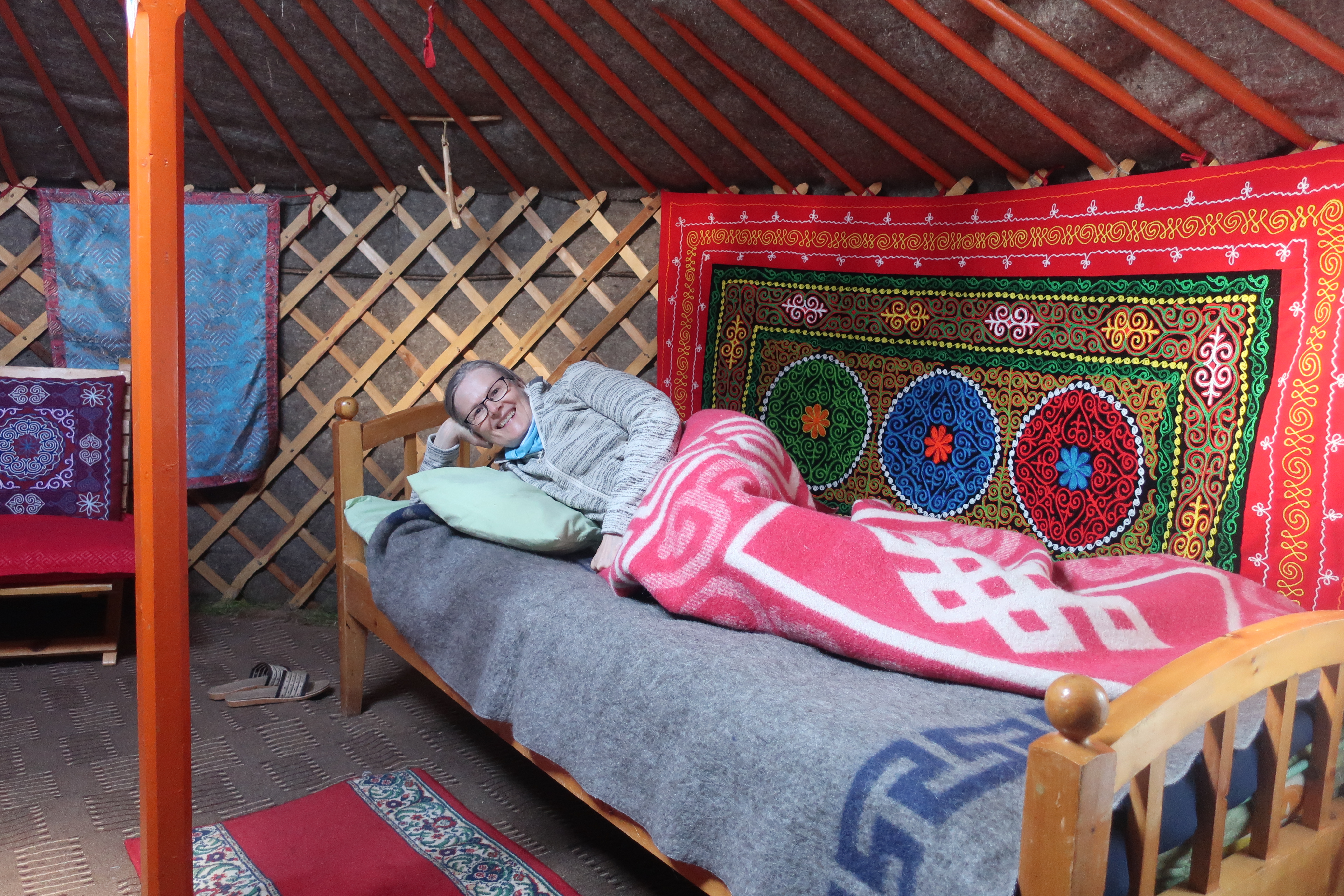 Apart from the guest gers, there were the restaurant and kitchen gers, the library ger, the shower ger, the shop ger, the massage ger, even the sauna ger! The white composting toilet privys, with sinks and solar powered lights, were the furthest buildings from the camp, first affectionately named as white houses, however soon renamed into trump towers.

Late that afternoon, we visited the local nomad family approximately a 15-minute walk from the camp. The family were busy milking the cows and took time to show us how to get milk from the cow's teat. Some of us even had a go at milking. 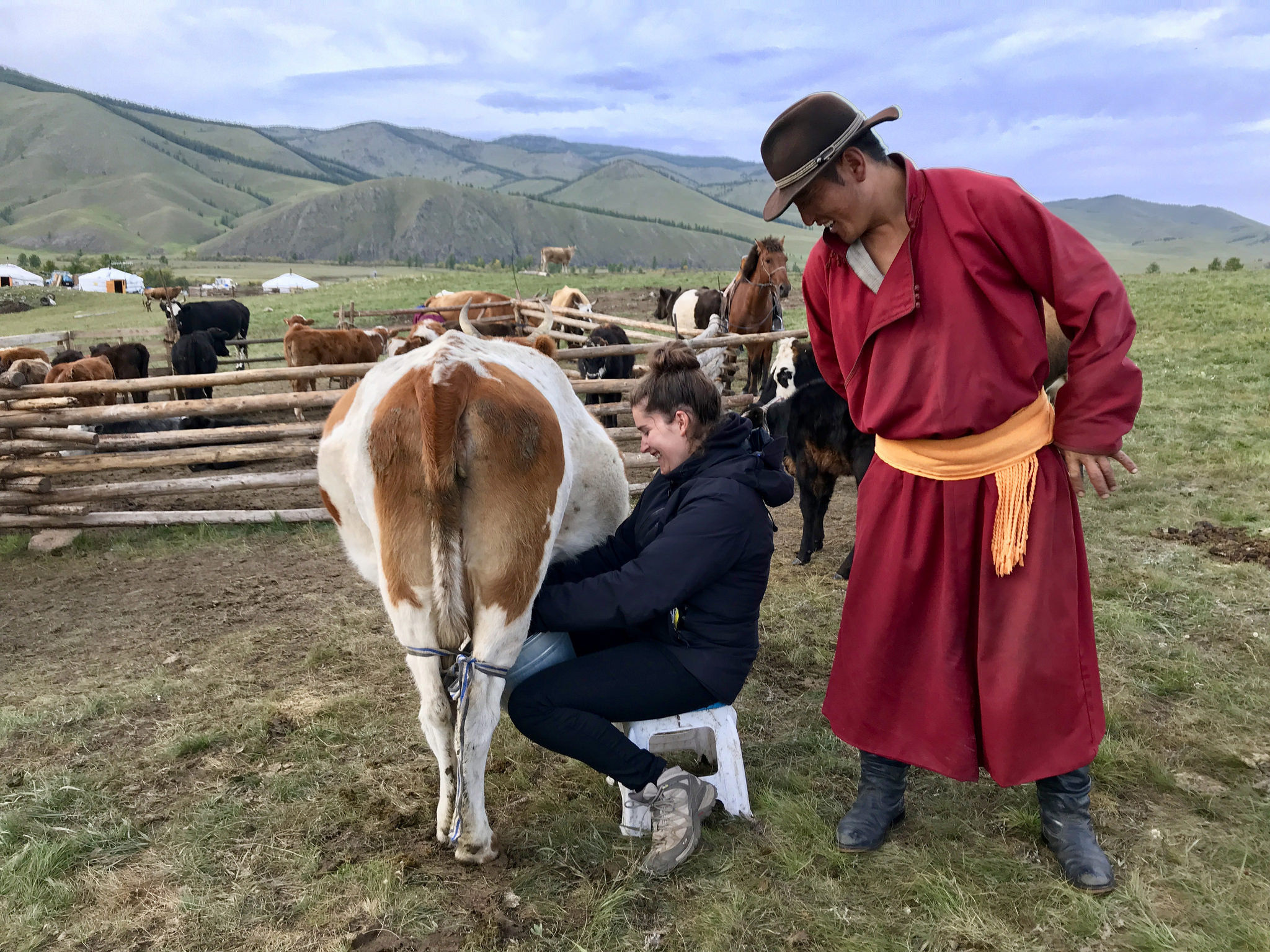 We visited one of the gers and enjoyed Mongolian milk tea. Busy chatting through our English-speaking guide, Nara (whose name is actually much longer), the family were happy to answer our questions, and we gave the kids some sweets. We saw yoghurt being made in a traditional skin bag, and tasted hard, dried yoghurt, full of calcium, which is also given to kids to chew on. No wonder we saw kids with perfect white teeth! After our visit, the family continued their evening chore - the milking.

After our return, a nice 4-course dinner was served in the restaurant ger - I could get used to this! 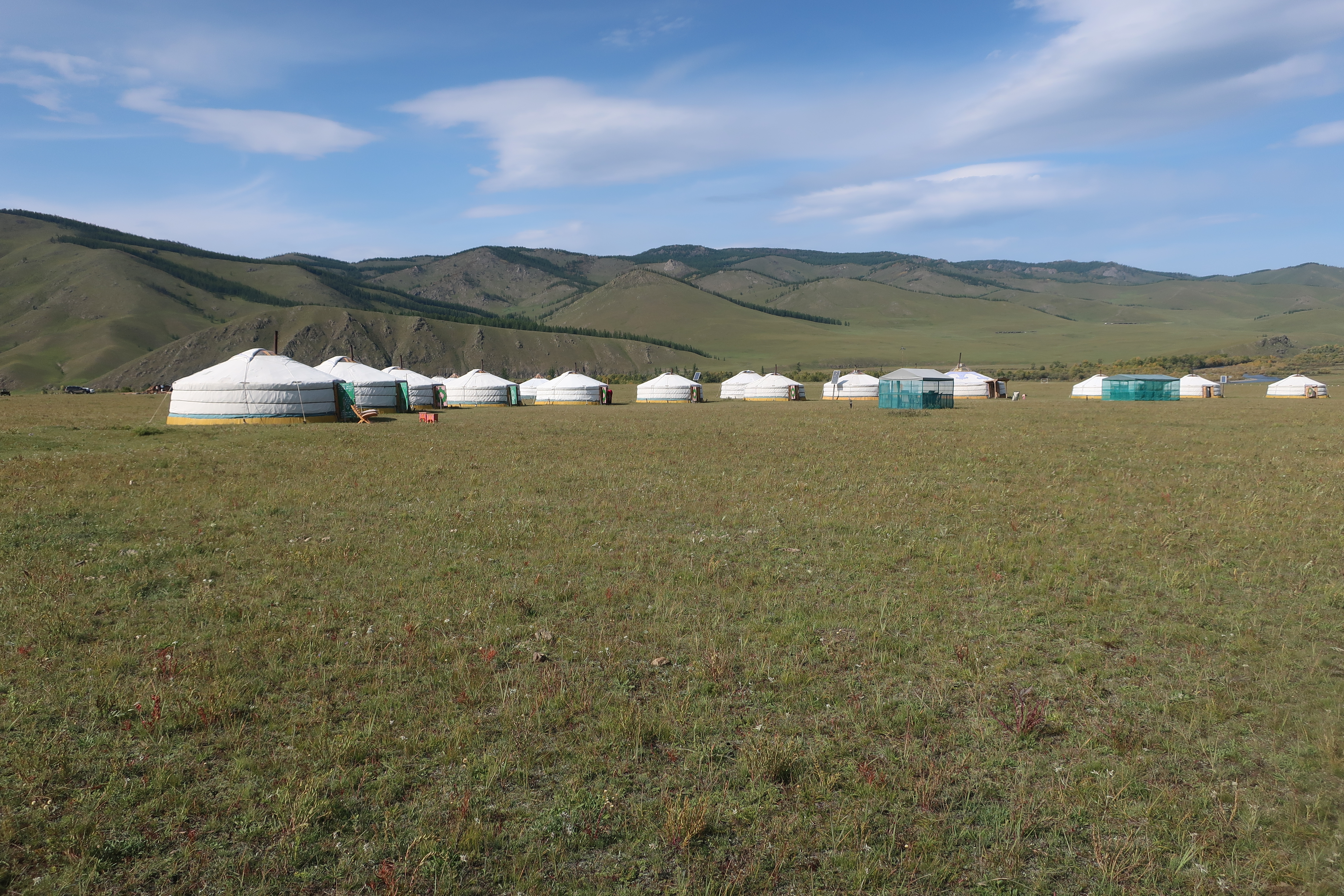 Next morning, after a surprisingly yummy and varied breakfast (be sure to taste the small Mongolian donuts!), we took a walk up the Tuul river, following a yak cart loaded with an inflatable catamaran raft. I was stopping frequently to admire the nature and take photos, filling my lungs with fresh air and energy. A Mongolian herd dog was also with us, running back and forth, stopping to investigate whatever he was interested in. At a good location, our yak guide and raft master set the raft up, and we put on our safety gear: life jackets and helmets. Armed with paddles, we jumped on the seats. We started our gentle flow down the stream. It was so nice! The river was mostly shallow, and one time we even had to get off the raft to walk a bit over an islet. Sometimes the river was deeper, narrower, and faster. I felt safe with the raft master, who at one stage burst into song, singing melancholy and beautiful Mongolian tunes. 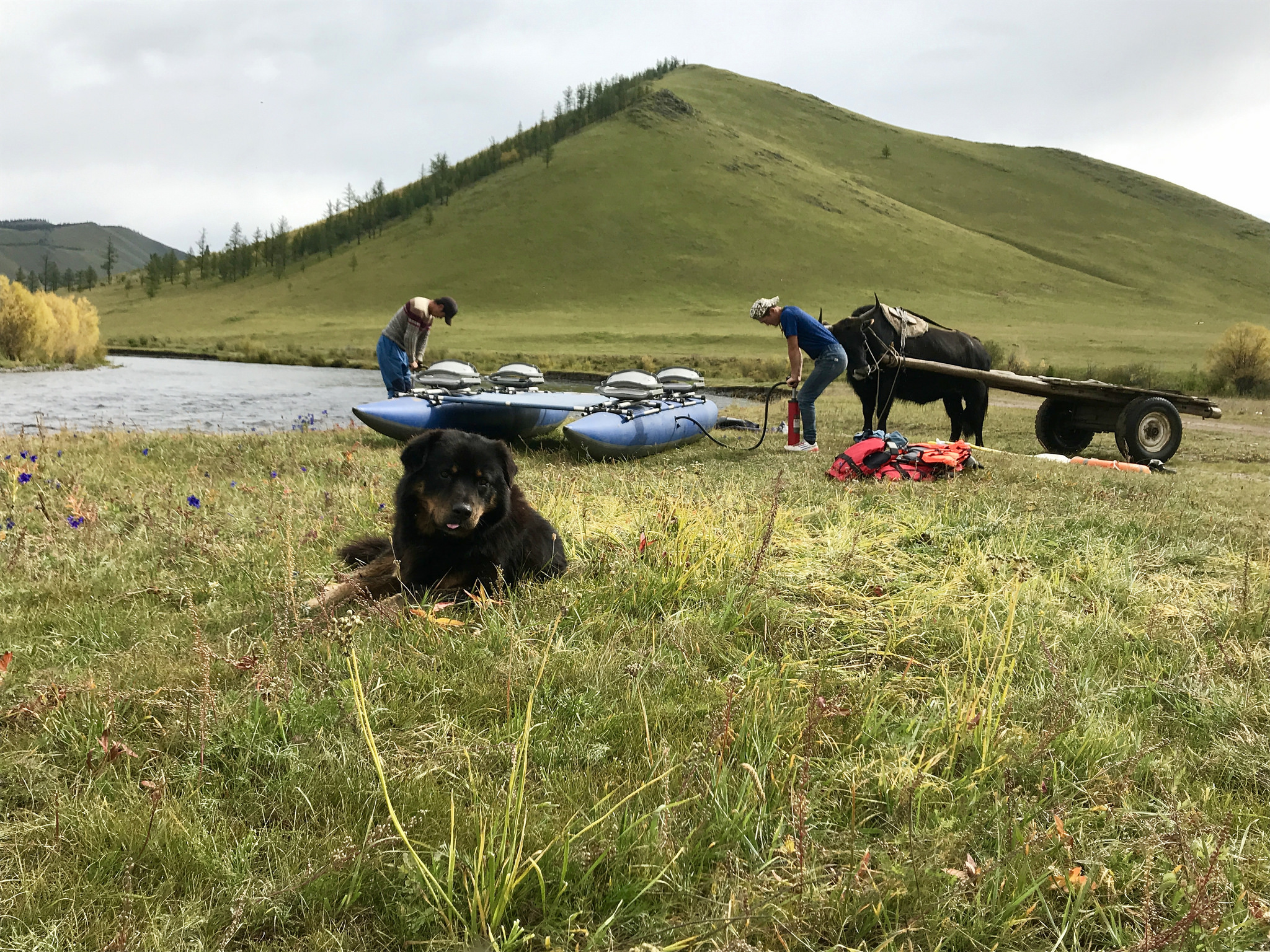 After landing near the sauna ger, and making our way to the camp, we had time for a quick 4-course lunch, before the start of our horseback tour. This time, our English-speaking guide waved us off after we followed (correction: our horses followed) the leader of the pack, ridden by our local nomad guide. 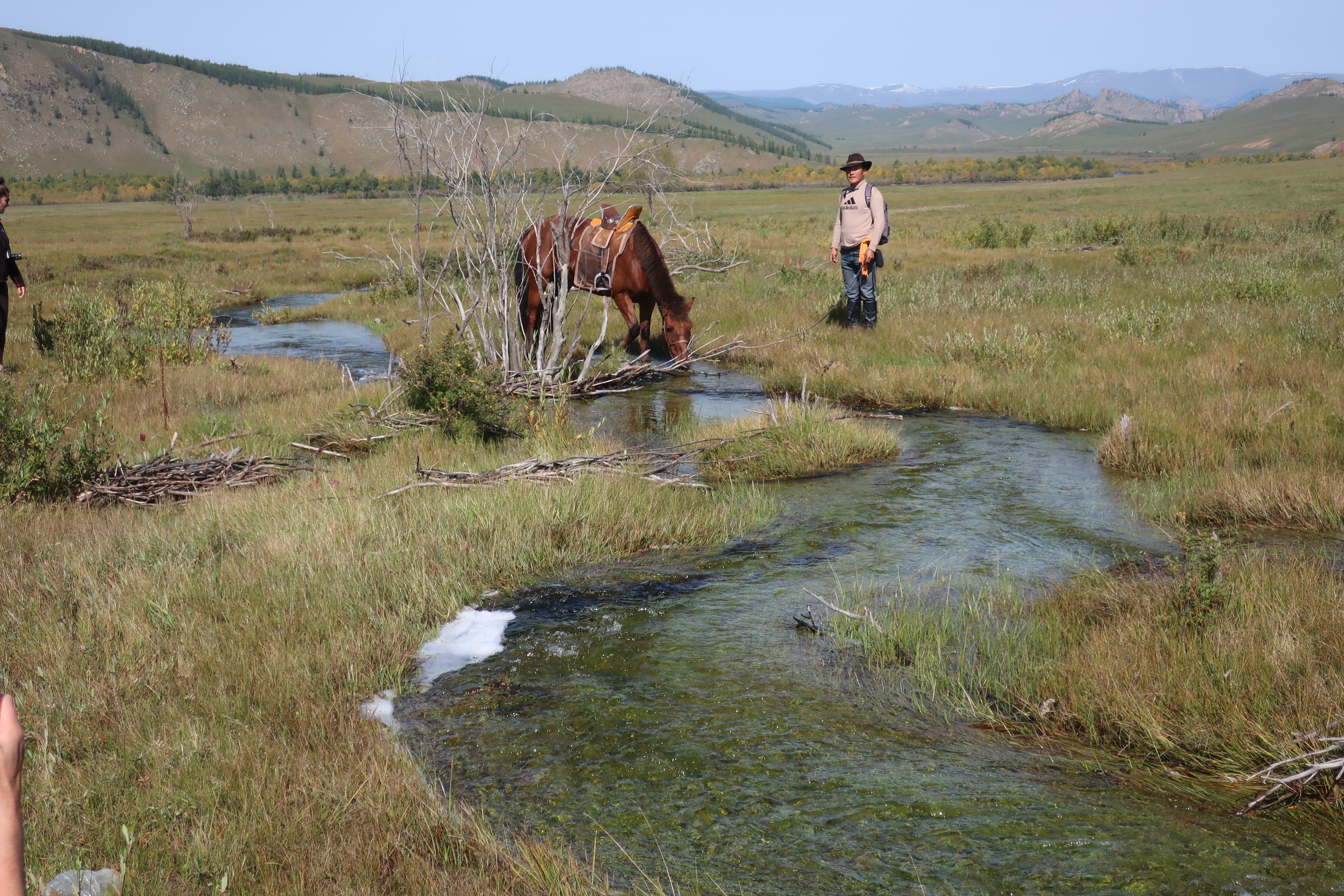 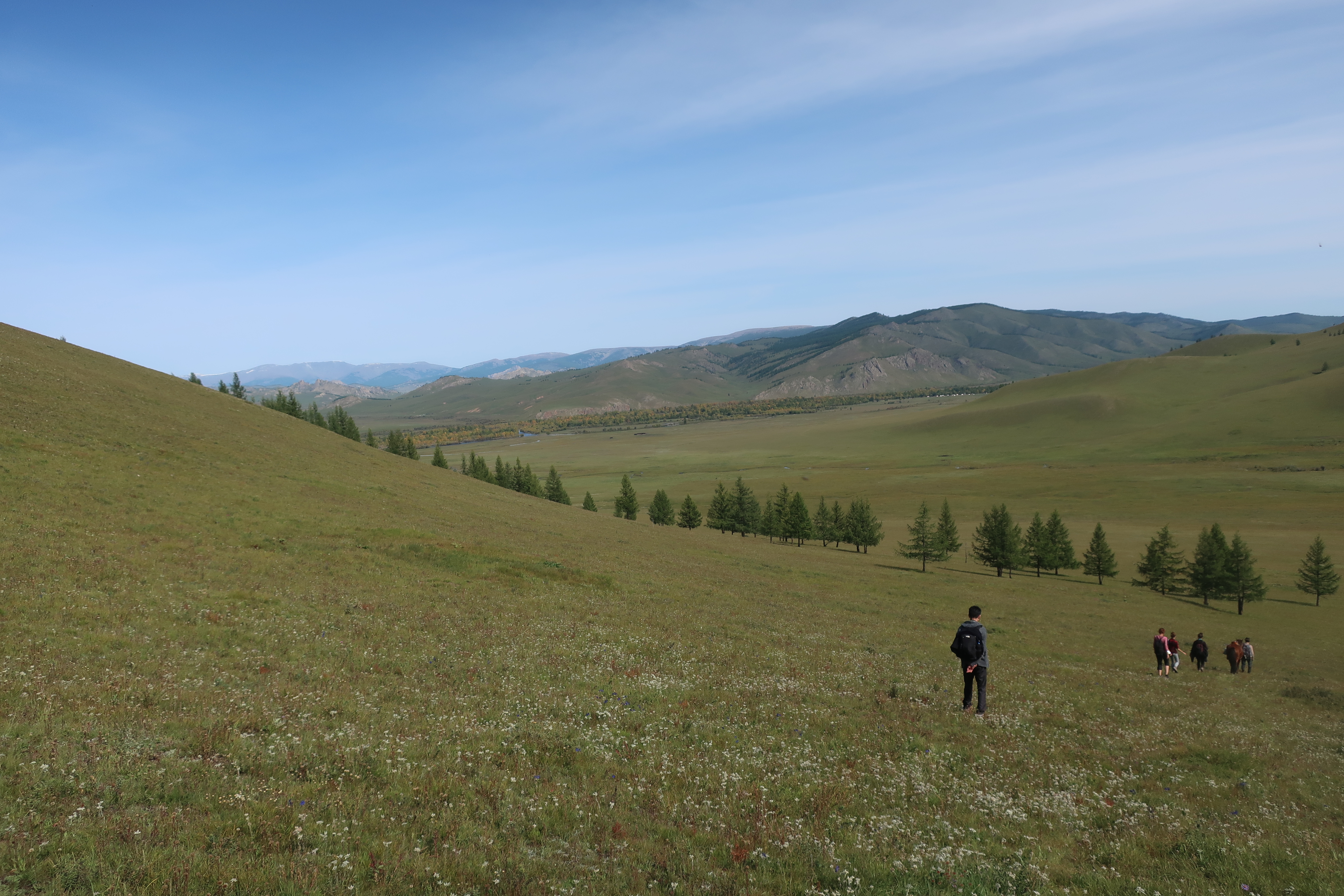 Another local nomad guide on horseback followed us, although he had to swing in front of my gentle, peaceful (possibly lazy?) horse to get him to follow the others. Oh man, the tail of this horse looked like he'd spent hours at the hairdresser getting highlights done. Such shiny hair, such healthy-looking horses! As you can gather, I am no horse lady, but I could not help falling in love with the gorgeous creatures. And wait, what is that: An eagle dove down near us, trying to catch a marmot, and when she did not catch anything, she just sat there, staring at us riding past her! I've never seen an eagle in the wild, let alone been stared at by one. It was wonderful! 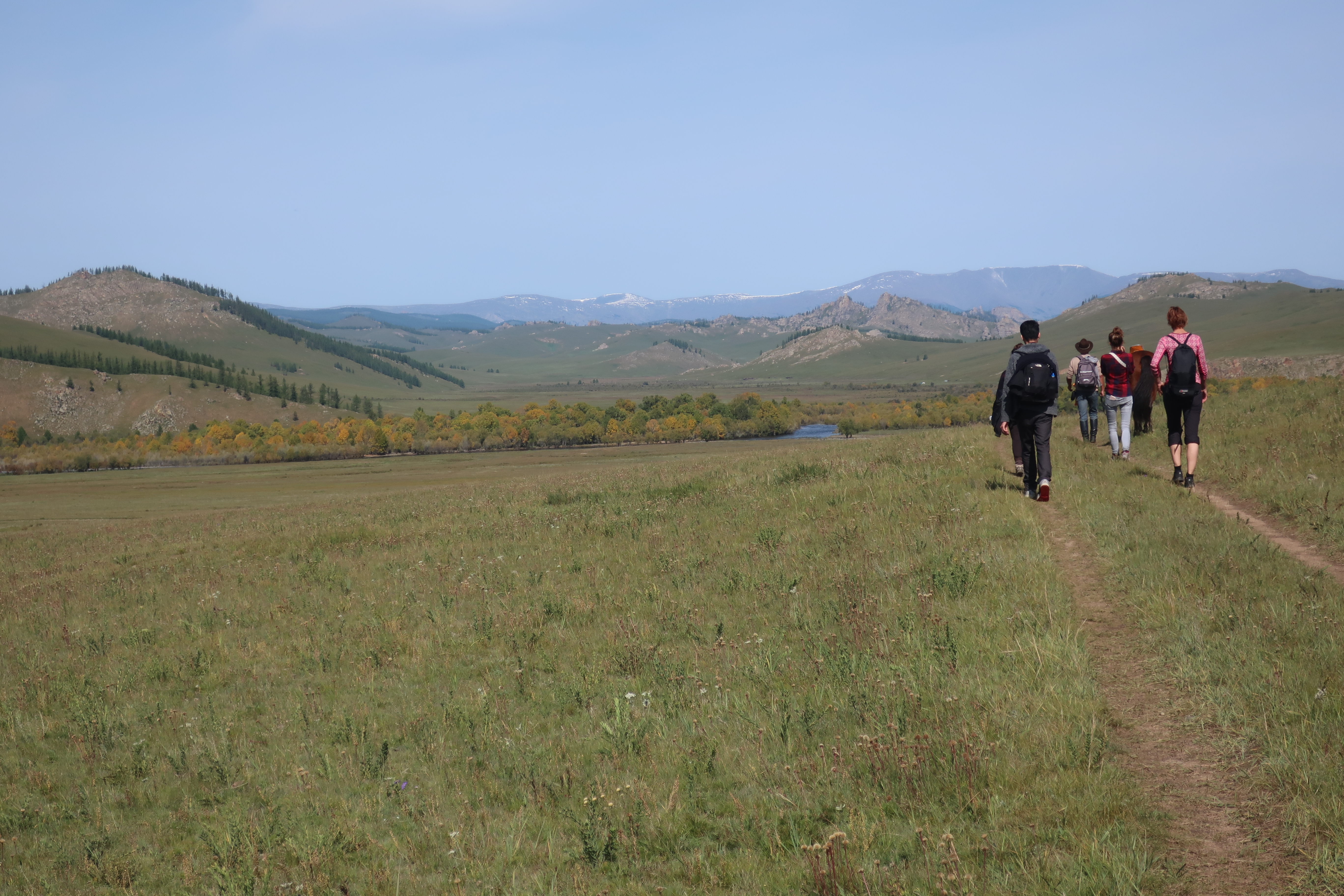 After some recent rain, we crossed tiny streams, which was exciting and fun. The guide stopped for a while to chat with local nomads, who were making hay for the winter. Gradually we made our way back to the camp.

Exhausted from all the adventures, we settled down in the library ger to watch a documentary called The Eagle Huntress. It told a story from Western parts of Mongolia, the Altai mountains, where a girl braved the customs to become the first ever female eagle huntress. She is a real person, and one of my group continued to the Golden Eagle festival and actually met her! Ok, you may be wondering how they had electricity in the middle of nowhere where there aren't even roads. Via solar panels, of course. There had been enough sun to run the TV/DVD player. We could also recharge our mobile phones in the kitchen ger if we gave our mobiles to kitchen staff. 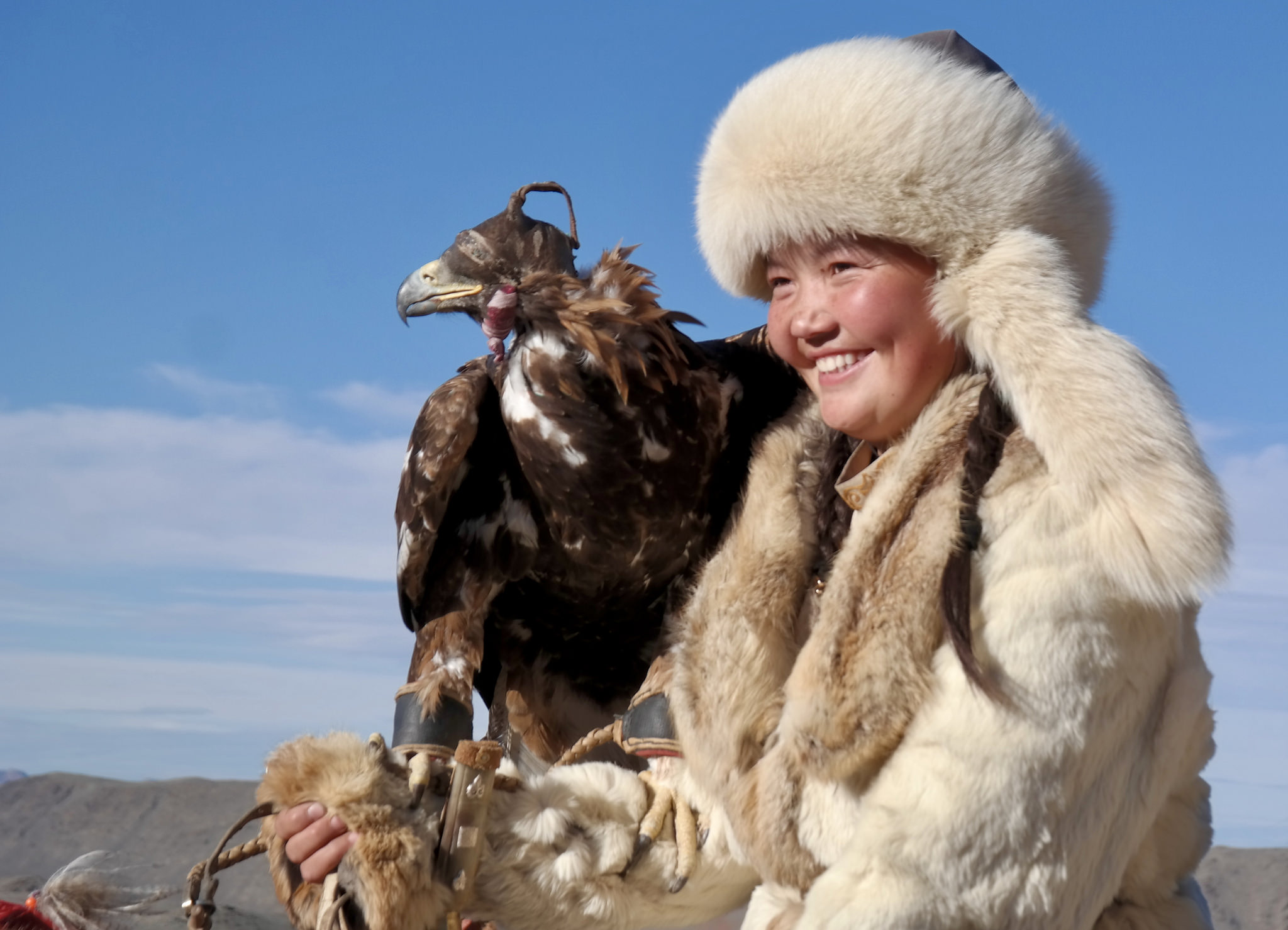 After dinner, we decided to have a camp fire. The horse guide and the raft master were happy to sing for us after they had been given some beer to lubricate their throats. (Local custom, our guide Nara told us, and we believed him.) Restaurant ger operated an honesty system, and we simply wrote down the number of beers, and paid for them before we left the camp. Such melancholy and beautiful singing! Staff from the camp also came to sit and enjoy the fire and the singing.

Needless to say, we all slept well that night.

The following day, after breakfast, the yak cart came to collect our luggage, and we said goodbye to the camp staff. It was time to head back to Ulaanbaatar, but I could have easily spent another couple of days at this camp, taking another ride on the horses, trekking and exploring around the camp and nearby mountains, going biking, having a sauna, perhaps a massage, and simply relaxing and reading a book. 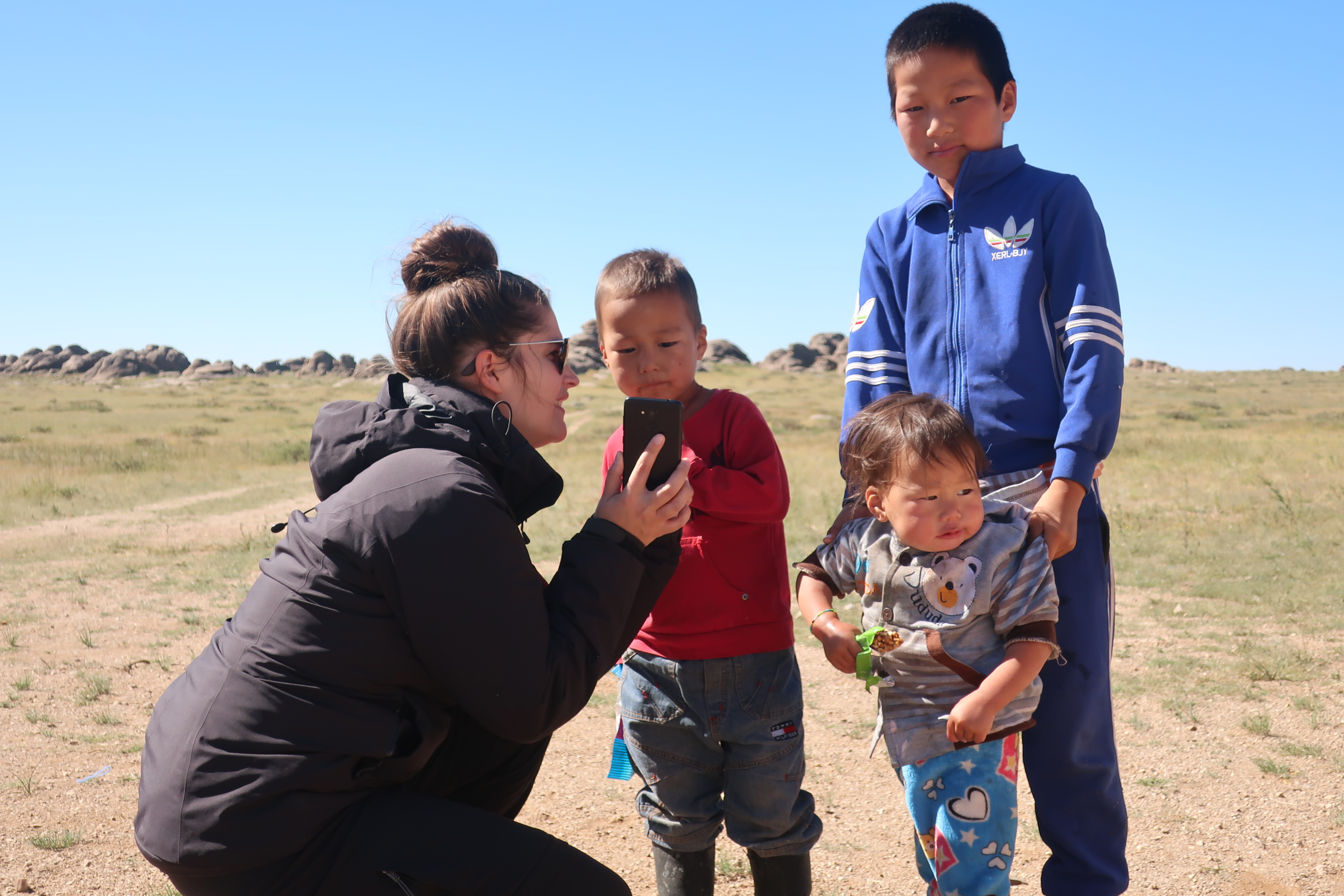 Our horse trekking and yak supported tours end with luxury camping at Jalman Meadows. A relaxing visit is easy to schedule with any tour in Mongolia, or trans-Mongolian railway journey. When you depart Jalman Meadows, be sure to visit the largest equestrian statue in the world, of Genghis Khan. 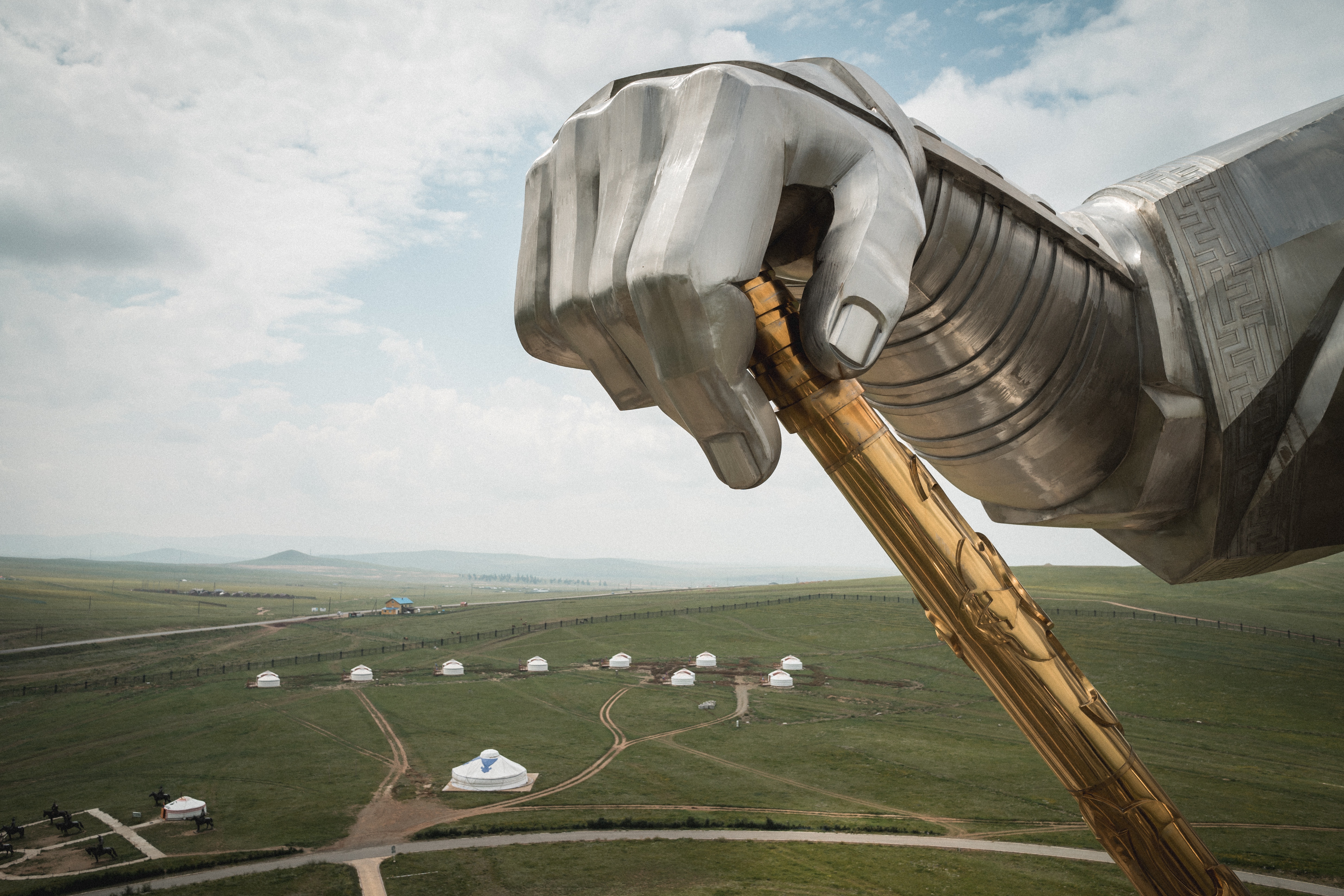 Our Mongolian tours staying at Jalman Meadows can be found here. 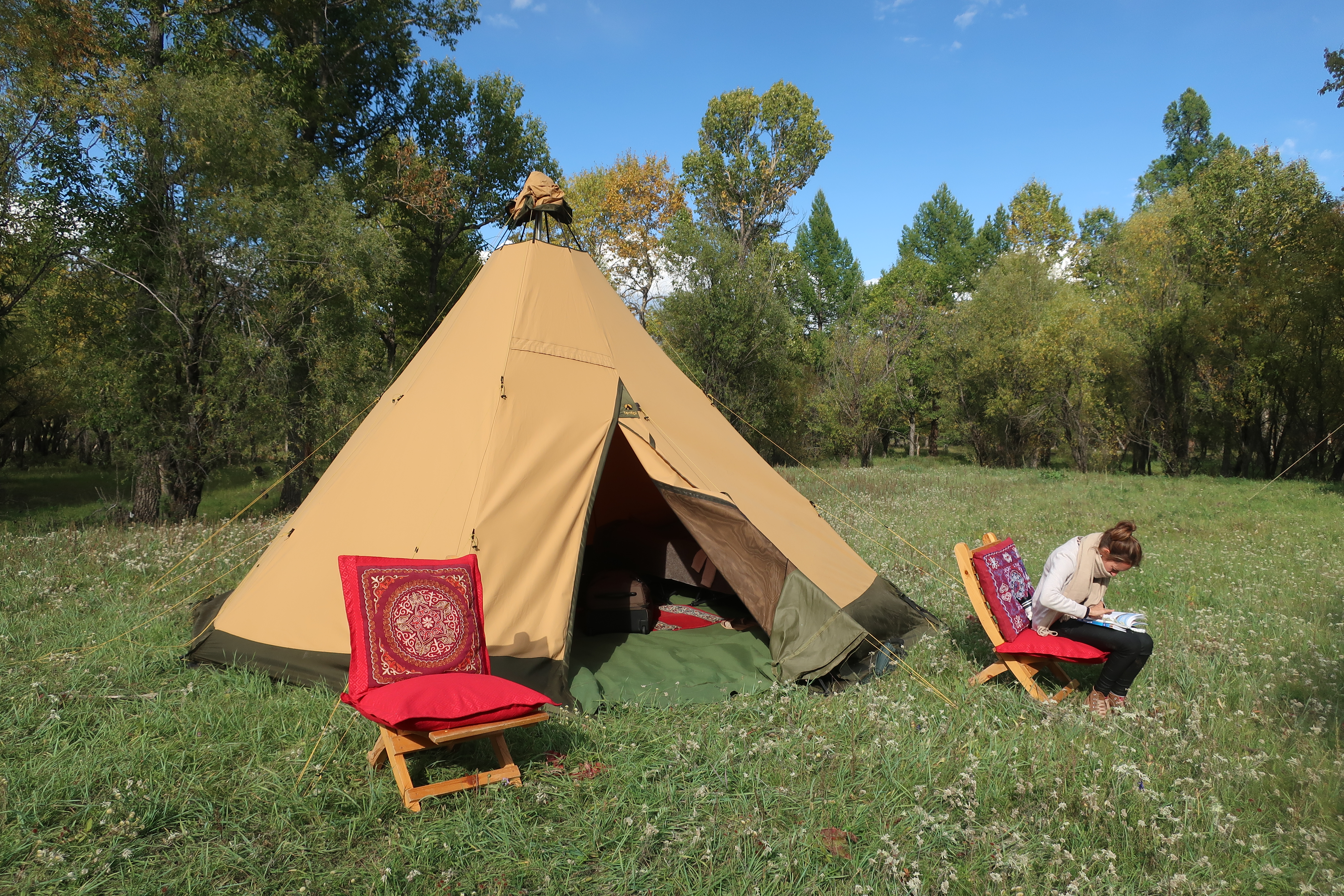 News
Just got back from...
Mongolia